Can Samsung Pay beat ApplePay in the payments race?

Executive Director at Mobey Forum
[/avatar]For a while already Mobey Forum has been hearing rumours that Samsung is planning a rival for Apple Pay, and has predicted this model in the NFC Business Model Whitepaper (2011).

According to industry expectations, Samsung plans to announce SamsungPay during the S6 launch at the Mobile World Congress on March 2nd. Samsung is believed to be working with Visa, making the new system compatible with any credit card issued by Visa. The security and virus protection is rumoured to be led by McAfee. Internally, the project has been called Project Zero, a name illustrating the launch pad for mobile payments.

Is Samsung taking a step back to get ahead?

At first glance one of the most puzzling piece of the solution is the rumoured third partner they have: LoopPay. LoopPay makes mostly magnetic stripe based mobile solutions, so the question is why is Samsung making a magnetic stripe payment solution when there are plenty of EMV capable contactless NFC mobile solution providers in the world? Why would they not go for NFC/contactless payments, something that Samsung has been working with for years already?

Maybe the answer is not either or – maybe it’s both.

After discussions in our workgroup we believe Samsung is working on two streams: a fast market entry with a magnetic stripe mobile payment solution, and another, NFC based solution for European and Canadian (EMV & contactless) markets as the next step. Their first priority is to take on the American market and beat their rival Apple in the short run. A magnetic stripe mobile payment service would work on all payment terminals and would exceed ApplePay’s immediate usage numbers. The possibility of paying with a mobile device at the  regular magnetic stripe terminal would seriously fade the glory that ApplePay has created with their NFC solution. After all, contactless terminals are still quite rare in the US (only <3% of the POS base).

Comparison between SamsungPay and ApplePay in USA 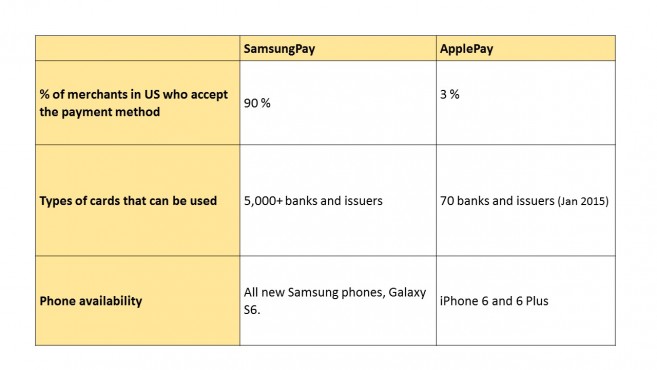 Samsung might be using the LoopPay’s patented innovation that makes it possible to transmit card data to the standard magnetic reader in the payment terminal without swiping. Before that the user must have activated the magnetic stripe card in the phone by swiping it through a mobile POS-type of device, which enters the magnetic stripe data to the phone. Presumably this tiny ‘magstripe reader’ would come with the purchase of Galaxy S6 and it would only be used for activating cards to the phone.

The beauty of the solution is the feature that would also enable all your loyalty cards to be stored in Galaxy S6 . This would mean immediate emptying of your wallet from the stack of loyalty cards – dream come true!

NFC for Europe and Canada

Samsung, like all the other players in the NFC mobile payments industry, has experienced fatigue due to slow market development. Mobey Forum believes that Samsung also has a mobile contactless payment solution in store, as a future, global solution. The global solution will probably have an embedded secure element, just like Apple Pay.

According to our sources, Samsung has already warned mobile network operators, that they will not be able to lock the usage of secure elements in handsets – as they cannot lock it for Apple devices either.

Samsung is not in hurry to enter into the European market with SamsungPay, because Apple hasn’t taken its payment solution to the Europea market yet. Despite the significant market shares Apple devices have in some EMV countries, we still haven’t seen ApplePay at any of these potential markets, although it’s 5 months and counting since launch.

If SamsungPay is true – R.I.P. MCX

Samsung Pay would mean a death stroke for MCX mobile payment solution. There are no success factors left for QR codes to survive in the upcoming battle of market shares. The MCX merchants cannot lock SamsungPay out of their systems, unless they decide to go back to cash based society as a defense.

Mobey Forum predicted the model in 2011

Mobey Forum’s ”NFC Business Models” predicted the business model where the handset manufacturer would work together with banks or schemes to provide a mobile payments solution (see cell A2 in  the chart below). Although the solution was considered ‘unlikely option’ at that time, it was highlighted as one of the possible options. Thanks to Jordi Guaus’ (now the Chair of the Mobey Forum Board of Directors) and his workgroup’s exceptional farsightedness, that option can be read with in one of Mobey Forum’s historical publications 4 years ago.

Little did we know how complicated and painful phases the entire NFC payments industry will go through before getting to the point where we are now, in 2015.

According to Mobey Forum’s knowledge, the Korean mobile giant will renew the touch based authentication system. Samsung has already worked with the PayPal solution that allow users to use fingerprint for the single purchases. This authentication method seems to be working well on the devices like Galaxy S5, Galaxy Note 4 and Galaxy Alpha.

When it comes to mobile payment authentication, Samsung is also changing its sensors’ ability. According to the news, it will not continue using the swipe-based fingerprint scanner, but changes to the touch-based fingerprint sensor.

by Amir Tabakovic, Co-Chair of Mobey Forum’s AI & Data Privacy Expert Group Those who closely follow the digital trends impacting financial services will surely remember that, not so long ago, cloud technology and artificial intelligence (AI) were widely touted as the technologies that would protect banks against the rising tide of fintechs, big techs,…