The European digital wallet landscape has evolved rapidly over the last five years. Each European market now hosts multiple competing wallets operated by various types of domestic and international entities. It has become ever more challenging to work through the complexity and simplify the situation.

A year ago the Mobey Forum Digital Wallet Working Group chaired by Soner Canko, CEO of BKM, set out to map the current state of the European digital wallet landscape. In particular, the group was interested in differentiating between the different types of wallets and identifying what successful wallet implementations in each market shared and had in common in terms of strategy, features, functionality and technology.

The working group has now completed an initial review. Profiles of all viable Digital Wallets have been created in the first ever Europe wide centralised database, which is exclusively accessible to Mobey Forum members via an online browser interface.

As of April 2017, 49 wallets have made it into the European database. Whilst many more were identified, the key inclusion criteria required that wallets be live and viable (in some exceptional circumstances pre-launch wallets have also been included), and secondly have payments as their core functionality.

The research generated some interesting and in some cases surprising findings. A snapshot is provided below. 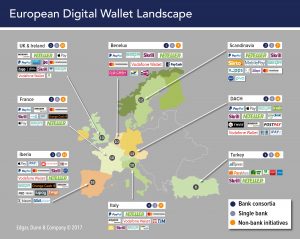 Banks or non-banks – who operates the digital wallets?

Of the 49 plus live digital wallets identified, 26 are operated by banks. Of these, bank consortia account for 14 digital wallets. These are wallets launched through a collaborative effort between two or more banks. The remaining 12 bank-led digital wallets have been developed and launched by single banks – without any collaboration and participation from other banks in their market. A common theme across Europe is the successful launch of bank led wallets for a specific domestic market. These include:  iDEAL (Netherlands), MobilePay (Denmark), BKM Express (Turkey), Swish (Sweden), Vipps (Norway).

How successful are non-bank led wallets?

Non-bank wallets account for the 23 other digital wallets. This category is a mix of international card schemes, mobile network operators, global technology companies and start-ups. With regards to wallets that have successfully established themselves in multiple markets, the vast majority are operated by non-bank players. Overall, the most wide-spread wallets in Europe are Neteller (8 markets) and Skrill (8 markets) both with niche appeal for online gaming and gambling communities. These are followed by PayPal (7 markets), SEQR (7 markets), Masterpass (6 markets) and Amazon Pay (in 5 markets). Interestingly, whilst the majority of telco led wallets have closed down, Vodafone’s wallet is still operating in 5 markets.

The research identified a number of notable success stories. In the competitive space, Denmark’s Mobilepay wallet operated by Danske Bank stood out as the clear leader. MobilePay is a case study of a bank succeeding through independent action. Its 3.4 million users represent nearly 60% of the Danish population of 5.6m and generate a payment volume of USD4bn per year[1]. In the collaborative space, Turkey’s BKM Express is one of number of success stories. The payment solution was launched in June 2012 collaboratively by 17 Turkish banks and by more than 15 participating merchants. As of Dec 2016, it reported publically that it had 1.2 million users and a 52% market penetration of e-commerce payments in Turkey[2].

Are new wallets still being launched?

With 9 launches, 2015 appears to have been the peak year for new wallet implementations. Of these, 6 were new bank-led digital wallets. Since then the rate of new digital wallet implementations has slowed with only 5 new wallets in 2016 and 5 new wallets expected in 2017. Of these, two (Wa! in France and Twint in Switzerland) are in fact mergers between existing wallets. A third new launch in 2017 is Tesco’s PayQwiq. After a successful trial period in 2016, Tesco, the UK supermarket, officially launched its new digital wallet PayQwiq in Jan 2017.

Are many digital wallets based on card rails?

27 digital wallets run exclusively over card rails. The remaining 22 leverage bank ACH infrastructure in some shape or form to offer account to account payments. The trend towards ACH is increasing in line with the emergence of real time payment infrastructure.

What technologies are being used for merchant POS payments?

What about banking apps?

How prepared are wallets for PSD2?

An interesting and perhaps surprising finding is the limited evidence of compliance with PSD2 regulations in terms of providing third parties with access to payment accounts. One example that does is Finland’s Siirto which has announced[3] the availability of the required open interfaces.

This latest generation of digital wallets is nearing the point in the cycle where the rate of new implementations is decreasing, and the post launch honey moon period is coming to end. Actual performance and business model sustainability are now coming into sharper focus. Whilst losers will naturally peel off, it’s still too early to pick a winner. Perhaps the eventual pan European platform has yet to launch.

With PSD2 likely to yield a further crop of new players, the European digital wallet landscape is set for a fascinating next chapter. Possibly the next wave of digital wallets may emerge from the large merchant community – especially those with a n intention to become Payment Initiation Service providers under PSD2. This would also follow the trend for ever tighter integration of the payment flow into the overall user experience. Merchants such as Uber have set a new benchmark for frictionless payments. From a consumer point of view, Uber payments have almost become invisible, having disappeared into the back ground as something that ‘just happens’ automatically.

This initial research sponsored by BKM is just the start. The digital wallet database, developed with assistance from Edgar, Dunn & Company, will be maintained by Mobey Forum and expanded to continue providing transparency and insights into the evolving European digital wallet landscape.

by Amir Tabakovic, Co-Chair of Mobey Forum’s AI & Data Privacy Expert Group Those who closely follow the digital trends impacting financial services will surely remember that, not so long ago, cloud technology and artificial intelligence (AI) were widely touted as the technologies that would protect banks against the rising tide of fintechs, big techs,…