Four main developments made their mark on 2015, including a striking growth in mobile payments

Turkey recorded a stellar performance in payment systems in 2015. Data from the Interbank Card Center (BKM) show that payments in many categories became faster and easier in 2015.

In 2015 there was also significant progress in terms of digital and mobile transformation and a substantial growth in cashless payments. The number of individual cards used for payments over the internet reached 22 million. The total value of card payments rose by 15 per cent.

As part of the transition to the creation of a cashless society, in 2015 Turkey made significant progress towards the introduction of its own payment method Türkiye’nin Ödeme Yöntemi, meaning “Turkey’s Payment Method” or TROY.

According to data from BKM the total number of cards in Turkey increased by 5 per cent in 2015 to 171 million. This means that Turkey has become the leading card market in Europe.

BKM General Manager Dr. Soner Canko made the following evaluation of developments in payment systems in Turkey in 2015: “2015 was a good year for the Turkish payment systems sector and one in which all of the important work of recent years really began to bear fruit. Turkey recorded a stellar performance in 2015. We used more cards and payments were faster and became easier. As a result, it was a year in which the country’s economy was able to benefit from savings in both time and money.”

Dr. Soner Canko highlighted the four most important developments in 2015: “In 2015 we began to see the results of the many projects that we had initiated in order to realize our goals of creating a cashless society and bringing greater speed and productivity to the Turkish economy. As we conducted operations, we spent less time occupied with making payments and increased our productivity.”

Dr. Canko noted that 2015 was the year in which Turkey both became familiar with and embraced TROY, which represents a turning point in the history of payment methods in the country. “TROY was developed by drawing on the sector’s accumulated knowledge and technological expertise,” said Dr. Canko. “TROY has further strengthened the image that Turkey had already acquired in the international arena as a country that serves as a pioneer and a role model for the sector. TROY is scheduled to become part of our lives in April 2016.”

Dr. Canko summarized last year’s statistical results as follows: “2015 was a year in which we continued to make significant progress in terms of cashless payments. The total volume of card payments rose by 15 per cent. Within this total, the volume of payments using credit cards increased by 14 per cent while total debit card payments recorded significant growth of 28 per cent. We see this as further healthy progress towards achieving our goal of creating a cashless society.” Data from the BKM showed that the total volume of card payments for purchases reached TL 526 billion. In terms of the total number of cards, Turkey ranks first in Europe with 171 million. Over the last five years, the share of card payments in total household expenditures has risen from 28 per cent to 39 per cent.”

22 million cards were used to make payments over the internet

In his evaluation of 2015 Dr. Canko said: “The digital transformation in payments has continued to accelerate. The total volume of card payments over the internet rose by 32 per cent last year, with the result that the internet accounted for 11 per cent of total card payments.”

“These figures show that in Turkey e-commerce and the resultant digital transformation are accelerating,” said Dr. Canko. “The greatest support for this comes from card payment systems. The pace of this transformation can be seen in mobile payments in particular. Today, mobile devices account for 43 per cent of all purchases over the internet.”

A golden year for contactless in 2015

Dr. Canko also provided some pointers to developments that will shape the agenda in 2016. “2016 will be the year of FinTech,” he said. “Technological innovations in the financial sector, what is known as FinTech, have been widely discussed around the world over the last two years. It is worth noting that payment systems rank first when it comes to FinTech initiatives. New FinTech innovations will make payments easier and more fun. At BKM, in 2016 we shall also realize projects to support the FinTech ecosystem.”

In terms of other future developments, Dr. Canko predicted that wearable technology, the mobile internet and the internet of things will make their mark on the years to come. “In the future, payments in every facet of life will become invisible,” said Dr. Canko. 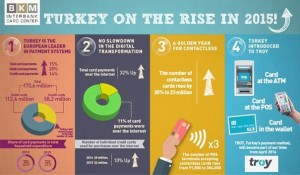